Since 2007, Fotoz, under the management of Richard Whitford and the enthusiastic guidance of Sam Roach, have been producing some of Australia’s finest rail heritage videos. Our annual NSW in Steam series has gained critical acclaim and each new release is highly anticipated by a number of loyal followers.

Over the years we have managed to accumulate countless hours of high definition video of steam heritage events, mainly from NSW, but also from overseas. We are currently working on NSW in Steam 2014, plus some USA and NZ future releases.

In 2014 we ran a special steam charter—originally set out to celebrate a milestone birthday, but as the event became bigger, the only way it could be realised was to open it up to our customers—thus was born the Fotoz Flyer which was an instant hit, as it was a gutsy move to send a steam engine out on its own up a mountain in this day and age. We are currently organising our next adventure (see the Fotoz Flyer page).

Fotoz involvement in rail preservation is no back seat either. We are constantly involved with ‘hands-on’ rail heritage work and donate services and product to various organisations. 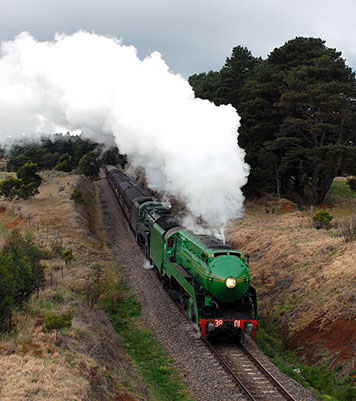