Fotoz Flyer 2014 — Over the Blue Mountains 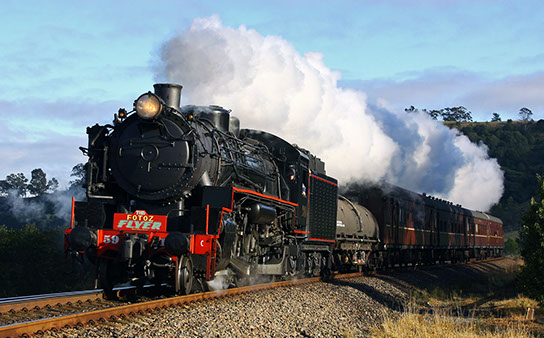 5917, adorned with the  Fotoz Flyer headboard rounds Maldon Curve, near the beginning of the long day.

The inaugural Fotoz Flyer was planned first and foremost to celebrate Richard’s 50th birthday. It rapidly developed into a great promotion for Fotoz videos, with lucky ticket holders on the train all eligible to receive our latest release at the time — NSW in Steam 2013 Twin Volume set, with the passenger able to choose the format — either DVD or Blu-Ray disc. With the price of the train ticket, it didn’t matter that passengers were getting a free DVD valued at $75 or not, as the trip in its own right was worth every cent.

Due to Trackwork on 23 August 2014, we couldn’t run out of Sydney Terminal — and because this was the closest weekend to Richard’s big day, it really needed to be THAT weekend. It also had the benefit of falling on Sam’s birthday — a double whammy! So with this in mind and the locomotive charter going through Lachlan Valley Railway, the next problem was how to get the locomotive from Eveleigh with the direct route west to our destination of Lithgow closed. Then Transport Heritage NSW came into the picture. With the LVR’s carriage set out of town, we needed to hire carriages from another operator, too! With the diversion to at least Liverpool and more likely Campbelltown, the idea of running out of THNSW home of Thirlmere came into play, utilising four of their carriages. So, on Friday, 22 August, 5917 and gin, plus FHG van headed to Thirlmere from Eveleigh.

The morning of the big day dawned to an apprehensive charterer (well, it was early — and — winter, so it wasn't really dawn, yet). What could go wrong, what would go wrong? The first concern of not getting enough people to subsidise the cost of running the train had disappeared in the days leading up to the event. Driver, Mark Stapleton and Fireman Byron Muter were primed and ready to go. The engine support crew had done a marvellous job of preparing 5917, mechanically and cosmetically — she was sparking black and the piecè de résistance was positioned that morning — the Fotoz Flyer headboard, hand-painted in the traditional NSWGR style of the Newcastle Flyer by Richard Kiejda.

Picton was the first station stop for the train and a remarkable number of people had travelled to the town to experience the full journey. The Fotoz Flyer was under way, with passengers sitting back and enjoying the steam trails and haunting whistles of the early morning run up the Main South to Campbelltown, then on to the next stop where the majority of passengers boarded, Westmead. From there it was a quick run to Penrith, where the 59 took water.

The climb up the Blue Mountains can only be described as remarkable. The load for 5917 had been kept conservative, but the 1952-built engine walked away with the challenge and left the passengers, crew and the extensive motorcade awestruck. Somewhere up the mountains the massive birthday ‘mud’ cake, baked by Simone De Beuzeville-Howarth was revealed. The official cutting was performed and cake distributed far and wide. We hope most people got to sample it — those that did certainly weren’t going hungry! After a brief stop at Katoomba, we were on our way across the Darling Causeway, down through the Ten Tunnels to Lithgow, where passengers detrained for lunch and the engine went off to Eskbank for servicing. We also picked up the final carriage to be refurbished for LVR, an FS car, waiting for us, delivered fresh out of Lithgow Railway Workshops. 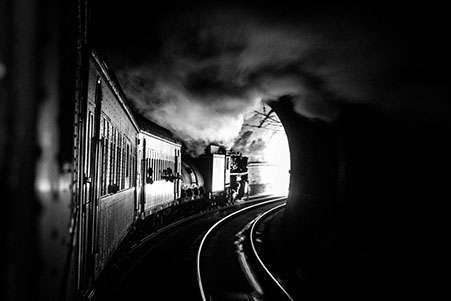 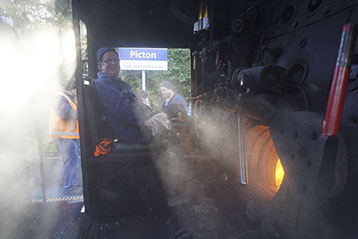 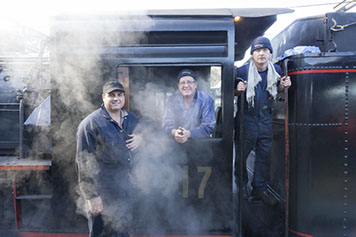 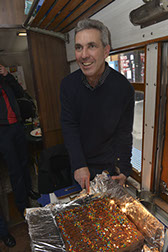 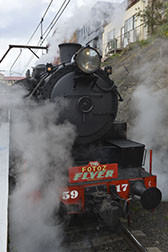 Richard cuts the massive mud cake, kindly bakes by Simone De Beuzeville-Howarth. 5917 sits in Lithgow platform after a stellar performance up the mountains. 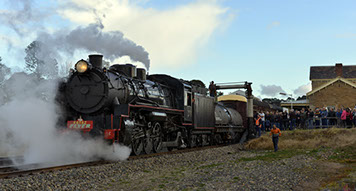 To facilitate turning the locomotive, it had been arranged to make use of the triangle at Lidsdale coal mine. Passengers were able to stay onboard as the train entered the colliery branch and the engine and gin run-around via the triangle. The train was then propelled the short distance to Wallerawang and watered from the remaining steam-era column on the Up end of the platform.

The essence of the trip is beautifully captured in this shot as the Fotoz Flyer breezes through the Ten Tunnels on the way to Lithgow.

Watering from the authentic steam-era column at Wallerawang. The Fotoz Flyer made use of the column at Penrith, too. 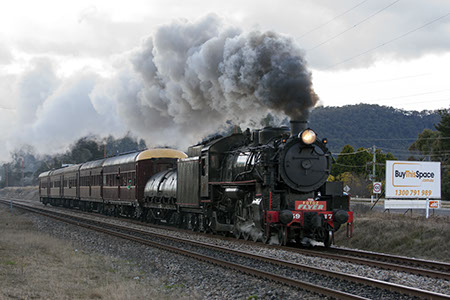 Arriving back at Lithgow to pick up those that had chosen not to travel out to Wallerawang, the Fotoz Flyer was heading home. The fresh crew had 5917 galloping up through the Ten Tunnels and we were through Mount Victoria before you knew it. Darkness had now fallen and the box-loads of DVDs and Blu-Rays distributed throughout the train on the way down the mountains to Penrith.

With many euphoric passengers departing the train at Penrith, and finally all the jobs done, it was time for this author to relax and catch up with old friends. Did someone say “Port”? Yes please — and those chocolates were delectable! Westmead came and went and the train suddenly felt empty, although many were still onboard to Campbelltown and Picton, making the most of the day. With all remaining passengers de-training at Picton, a remarkable number set themselves up at various locations on Thirlmere Bank to witness ‘their train’ from trackside.

The transfer back to Eveleigh took place the following afternoon, the locomotive serviced and coaled at the Trainworks facility while a few volunteers swept and mopped the THNSW carriages. 5917, gin, the FS carriage we picked up at Lithgow and the FHG van that had been left at Thirlmere travelled back to Eveleigh — the show put on by the mighty American-built Baldwin locomotive having a lasting impression.

While the Fotoz Flyer was originally set to be a ‘once-off’, the enthusiasm around it has prompted us to try to make it an annual event, marking the launch of our latest video — hence the Fotoz Flyer for 2015, heading up the Illawarra Escarpment — double-headed!

Now with the LVR's FS carriage attached, 5917 powers the Fotoz Flyer through Marangaroo on its way back from Wallerawang. 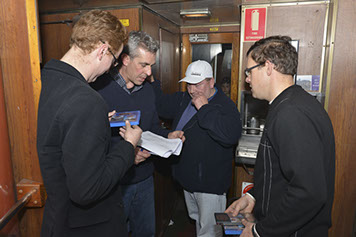 Handing out NSW in Steam DVDs and Blu-Rays to all the lucky passengers on the Fotoz Flyer. 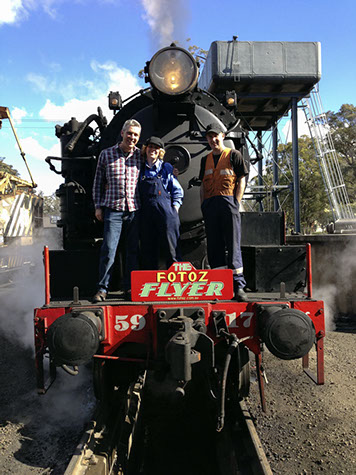